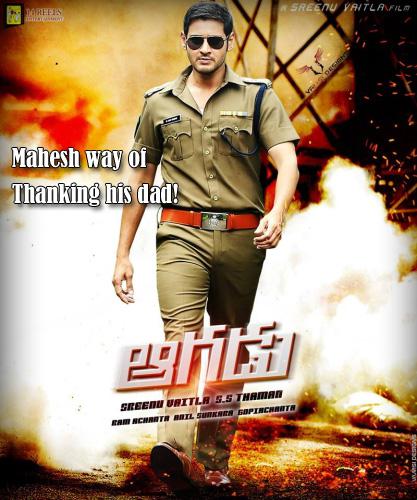 Aagadu (English: He Will Not Halt) is an upcoming Telugu Action Comedy film written by Anil Ravipudi, Upendra Madhav and Praveen Varma and directed by Srinu Vaitla. It stars Mahesh Babu, Tamannaah and Sonu Sood in lead roles while Shruti Haasan made a special appearance by performing an item number. Apart from them, the film features an ensemble cast of Rajendra Prasad, Nadhiya, Rao Ramesh, Brahmanandam and M. S. Narayana in key roles. The film is set in the backdrop of Tadipatri town of Ananthapuram District in Rayalaseema in which Mahesh Babu would essay the role of a Circle Inspector.

The film is produced by Ram Achanta, Gopichand Achanta and Anil Sunkara on 14 Reels Entertainment banner who earlier produced Srinu Vaitla’s Dookudu which also featured Mahesh Babu in the lead role. The soundtrack for the film will be composed by S. Thaman which marks his 50th film as a music composer while K. V. Guhan and M. R. Varma handled the cinematography and editing respectively, all of them being the part of technical crew of Dookudu. The film was launched on 25 October 2013 at Ramanaidu Studios, Nanakramguda in Hyderabad. The film’s principal photography began on 28 November 2013 at Hyderabad and ended on 5 September 2014 in Ooty. The film is scheduled for a worldwide release on 19 September 2014.