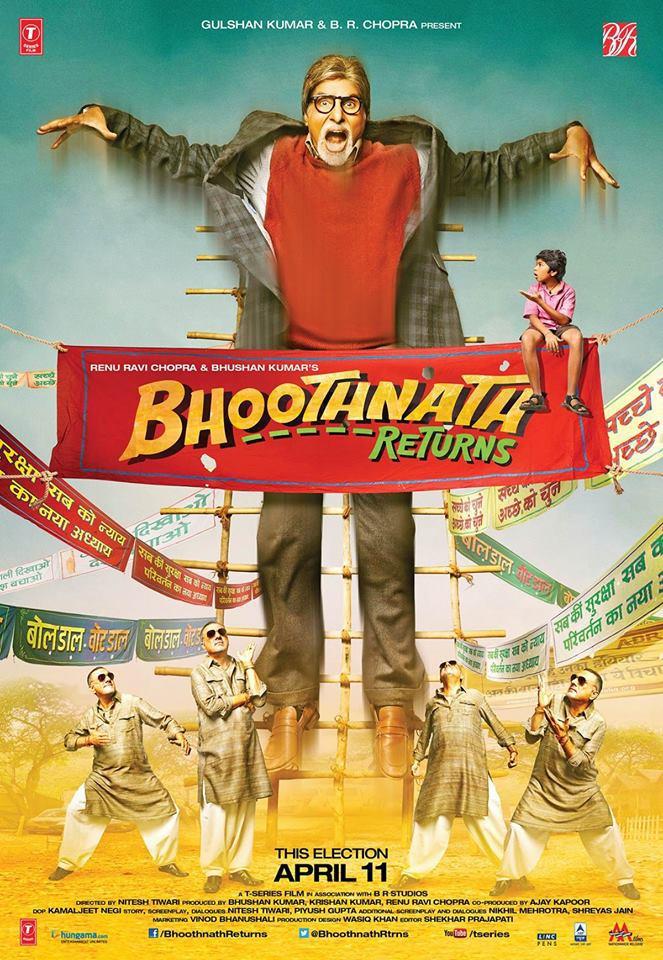 Bhoothnath Returns is an Indian horror comedy film directed by Nitesh Tiwari and produced jointly by Bhushan Kumar, Krishan Kumar, Ravi Chopra and co-produced by Ajay kapoor. A sequel to 2008 film Bhoothnath, the film features Amitabh Bachchan in a leading role followed by Boman Irani and Shahrukh Khan in a supporting role. As shared by Bachchan on Twitter, shooting of the film began on 10 October 2013. The film also has a cameo appearance of Shahrukh Khan and Ranbir Kapoor.

Synopsis: Bhoothnath Returns takes Bhoothnath’s story forward. As he returns to ‘Bhoot World’ he is greeted with taunts and condemnation from other ghosts for bringing disrepute to the ghost-community for getting bullied by a kid on Earth. Post the humiliation, Bhoothnath decides to redeem himself and come back to scare a bunch of kids. Bhoothnath’s search for kids brings him to Akhrot, a slum kid who is also the only person who can see him. Together they agree to help each other and their friendship sees them get involved in a cause that is bigger than they had ever imagined. To move ahead they will need to take on one of the country’s most powerful and corrupt politician Bhau. The Lok Sabha elections are nearing and Bhau’s victory is a mere formality, or is it? In a world, where a common man is afraid of politics, will a common man’s ghost overcome his fear to stand up for what’s right and fight against injustice? Bhoothnath Returns is an entertaining tale of good against evil, weak against powerful, past against future.

Party With The Bhoothnath – Amitabh Bachchan – Yo Yo Honey Singh