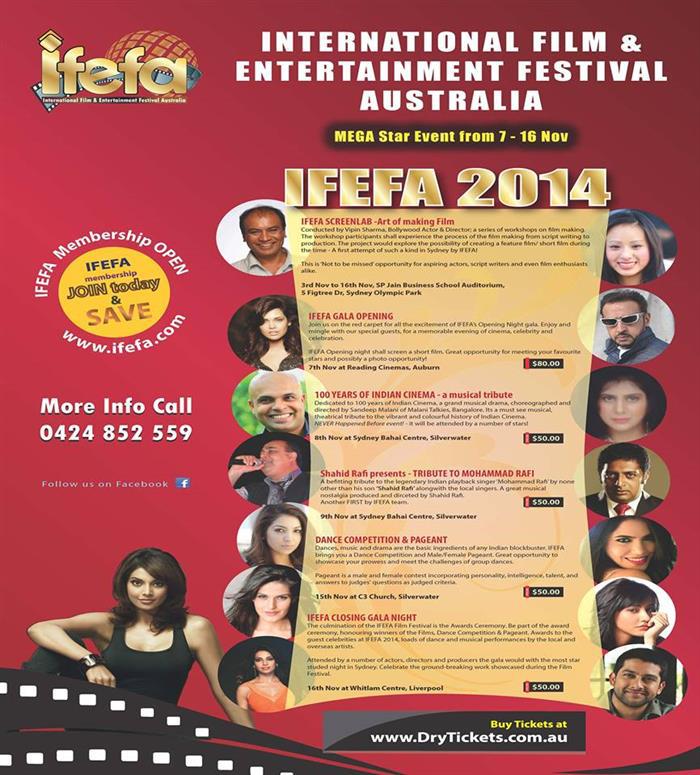 IFEFA program is for everyone! Dedicated to 100 years of Indian Cinema, IFEFA 2014 program is choc-o-block with Film Entertainment, Star appearances, Musical dramas and nostalgia from the memory lane.

There is something for everyone!

Conducted by Vipin Sharma; a series of workshops on film making. The workshop participants shall experience the process of the film making from script writing to production. The project would explore the possibility of creating a feature film/ short film during the time – A first attempt of such a kind in Sydney by IFEFA!

This is ‘Not to be missed’ opportunity for aspiring actors, script writers and even film enthusiasts alike.

Join us on the red carpet for all the excitement of IFEFA’s Opening Night gala. Enjoy and mingle with our special guests, for a memorable evening of cinema, celebrity and celebration.

IFEFA Opening night shall screen a short film. Great opportunity for meeting your favourite stars and possibly a photo opportunity!

Dedicated to 100 years of Indian Cinema, a grand musical drama, choreographed and directed by Sandeep Malani of Malani Talkies, Bangalore. Its a must see musical, theatrical tribute to the vibrant and colourful history of Indian Cinema.
NEVER Happened Before event! – it will be attended by a number of stars!

A befitting tribute to th legendary Indian playback singer ‘Mohammad Rafi’ by none other than his son ‘Shahid Rafi’ along with the local singers. A great musical nostalgia produced and directed by Shahid Rafi.
Another FIRST by IFEFA team.

Dances, music and drama are the basic ingredients of any Indian blockbuster. IFEFA brings you a Dance Competition and Male/Female Pageant. Great opportunity to showcase your prowess and meet the challenges of group dances.

Pageant is a male and female contest incorporating personality, intelligence, talent, and answers to judges’ questions as judged criteria.

The culmination of the IFEFA Film Festival is the Awards Ceremony. Be part of the award ceremony, honouring winners of the Films, Dance Competition & Pageant. Awards to the guest celebrities at IFEFA 2014, loads of dance and musical performances by the local and overseas artists.

Attended by a number of actors, directors and producers the gala would with the most star studed night in Sydney. Celebrate the ground-breaking work showcased during the Film Festival.

SHREYA GHOSHAL Live in Sydney on 21st August 2016
Performing all over the world, captivating audiences with her charming personality and above all her musical ability, Shreya will be bringing her evening of wonderful music at the Sydney Olympic Park Sports Centre on 21st August 2016.