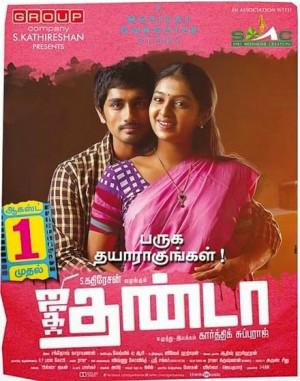 Jigarthanda is a 2014 Tamil musical gangster film written and directed by Karthik Subbaraj. Produced by Kathiresan’s Five Star Films, it features Siddharth, Lakshmi Menon and Bobby Simha in the lead, while the supporting cast includes Karunakaran, Guru Somasundaram and actor-director Pratap Pothen. Gavemic U Ary was the film’s cinematographer, making his debut in Tamil cinema, and Vivek Harshan was the film’s editor. Santhosh Narayanan composed the songs and background score.

The shoot of the film, entirely held in Madurai, started on June 12, 2013 and was completed after five months on November 21, 2013. Prior to the release, Forbes India Magazine ranked the film on the fifth spot in its 5 Indian Films to see in India 2014 list, published on 31 December 2013. Jigarthanda released on August 1, 2014 worldwide to positive reviews from critics who appreciated the film’s script, performances, cinematography and music. The film was also dubbed into Telugu as Chikkadu Dorakadu, becoming Siddharth’s first Telugu release in Telangana and Andhra Pradesh post their bifurcation. [More Details]

Synopsis: An aspiring director targets a ruthless gangster for making a violent gangster film. His discreet attempts to research the gangster fail miserably. Finally when he gets caught snooping, the tables are turned on him. [More Details]