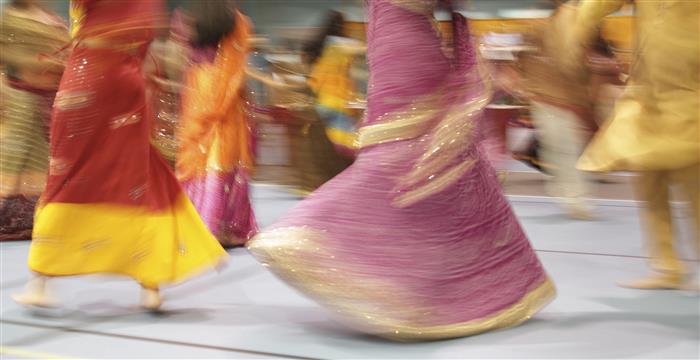 It is back – the evening of Rhythm, Dance and Colour

If it is Indian and if it is Gujarati, then it has got to be Garba!

Last year, the Michael Wenden Aquatic Leisure Centre in Miller (near Liverpool) played host to an energetic and vibrant display of music, song, dance and colour during the Garba and Dandiya Raas celebration. Hundreds of men, women, boys and girls, all decked in exquisite traditional attire, danced to the beats of the dhol and tabla. Lilting music and soulful singing lifted the spirits of the dancers as they moved around with grace and synchronised footwork. The more talented ones showed a repertoire of step-sequences including the famous ‘Dodhiyu’ in its various forms, the ‘Popatiyu’, the ‘Tran Tali’ and others. There were those content with the simpler ‘be tali’ and the ‘dandiya-raas’ which are also the favourites of first-timers. Importantly, everyone had a lot of fun.

This year on Saturday, 5th October, 2013, the same fun is promised. Michael Wenden Leisure Centre is once again the venue for this fabulous fun-filled evening of rhythm, dance and colour as the Navratri Cultural Group prepares for yet another landmark year of Garba and Raas.

For the Gujarati Indians, Navratri is probably the most important festival of the calendar. It marks the victory of Good over Evil as Mataji prevailed over the demons and established peace. Gujarati Indians traditionally celebrate this event by dancing and singing for nine nights.

However, modern Gujarati Raas-Garba has gained national and international popularity over the years and attracts music and dance lovers from all backgrounds. The Navratri Cultural Group is proud to have kept the tradition alive in Sydney for more than 25 years and their celebrations feature a unique blend of modern and traditional music, songs and dance.

Yummy Indian food will be on sale and all proceeds from the sale of food will be donated to Shri Shiv Mandir of Minto. All interested are welcome to attend for an entry of just $7 to be paid at the door.