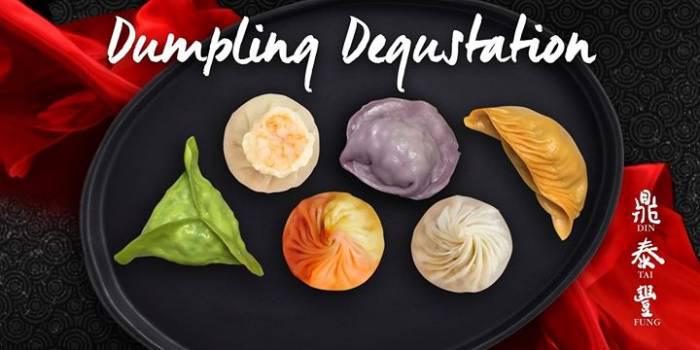 TAKE A JOURNEY WITH DIN TAI FUNG: RETURNING FAVOURITES, NEW FLAVOURS AND CLASSICS WITH A TWIST IN A DUMPLING DEGUSTATION

Din Tai Fung, arguably the world’s most famous dumpling specialist, will showcase dishes that have earned them a cult status with an 18-course degustation.

Experience a dumpling journey with eight new flavours, the return of the giant Xiao Long Bao, crowd favourites and classics with a twist.

For those with a sweet tooth, the three dessert dumplings including green tea, sesame mochi and chocolate banana are all brand new.

Classic Din Tai Fung dishes have made their way into the 18 courses, but don’t expect these as you know them.

Twists on the favourites include the black truffles pork dumpling with a yin-yang appearance made with squid ink; seafood and fish roe dumpling; crab meat and roe with pork dumpling.

As each morsel is served, guests will be guided on what accompaniments best enhance each flavour, of course you can douse it in soy should you wish but the masters are there to offer advice.

The giant Xiao Long Bao dumpling, seven times larger than the regular, is back by popular demand served with a jumbo straw so you can sip and slurp the steamy broth with ease.

The lucky dumpling in its auspicious colours will also return; made with eight ingredients considered to be lucky by the Chinese.