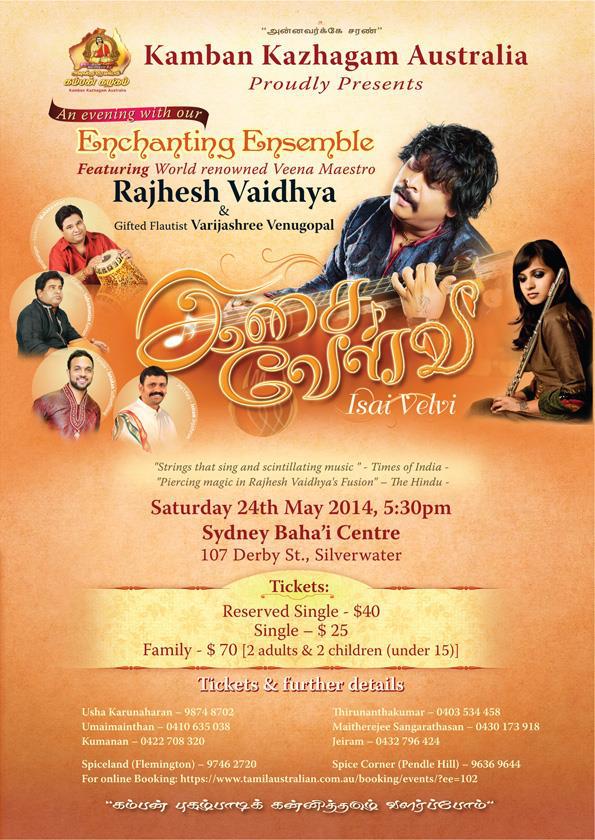 To all music lovers,

Kamban Kazhagam Australia is dedicated to the promotion and development of the three components of Tamil language in the form of Literature in prose and verse, Music and Theatricals. Following the great success of previous “Isai Velvi” concerts in 2008, 2010 and 2012, we now proudly present “Isai Velvi 2014 – Enchanting Ensemble”.

Rajhesh Vaidhya, who previously led the successful “Isai Velvi 2010” concert, is no stranger to Australian music aficionados. Brought up with a rich musical heritage, where his father Sri K.M. Vaidhyanathan was a stalwart both in Mridangam and Ghatam, Rajhesh advanced his training under the guidance of world-renowned and critically acclaimed Carnatic Veena maestro Shri Chitti Babu. Rajesh’s previous visits to Sydney have been enthralling experiences in which he captured the hearts of thousands of music lovers with his blistering and unparalleled speed on Veena. However, it is Rajhesh’s ability to effortlessly weave elements of traditional Carnatic music into his pieces, through his utilisation of electric and amplified strings that truly distinguishes him on the international music stage.

Varijashree Venugopal also hails from a prolific musical background with her father, H.S. Venugopal, a renowned flute Vidwan in India. Presently, Varijashree’s tutelage is overseen by ‘Gaana kalanidhi’ Vidwan Salem P. Sundaresan and has been complemented by flute training under the guidance of her flutist father for the past 7 years. Despite her young age, Varijashree’s already stellar career is decorated with numerous awards and titles, all of which highlight her unmatched ability and rich talent.

Please join us on a captivating melodious journey and immerse yourself in the marvels of traditional Carnatic/Classical music at “Isai Velvi 2014 – Enchanting Ensemble”.

Seats are limited so please book your tickets early.