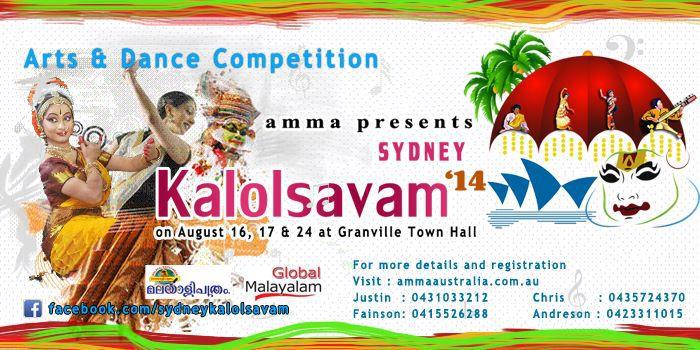 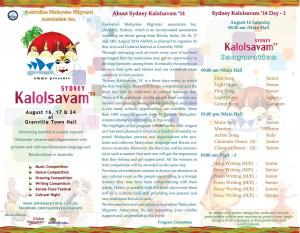 For more details and registration

Australian Malayalee Migrants association Inc. (AMMA), Sydney, which is an incorporated association enclosing an ethnic group from Kerala, India. Members of this association share same mother tongue and cultural heritage. On 16, 17 and 24th August 2014 AMMA is planned to organize its first Arts and Cultural festival at Granville, NSW.

This cultural event has been named as Sydney Kalolsavam ’14’. Through arranging such an event every year it has been envisaged that the ethnic group may get an opportunity to develop harmony among them. Eventually the people can nurture their gifts and talents and can contribute more creatively to their society.

Sydney Kalolsavam 2014 is a three days event, in which the first two days, there will be arts competitions and the third day will be celebrated as cultural harmony day. There will be a platform for the people from the ethnic group having talents under veil since there is not many cultural opportunities are available. More than 350 expected people from 18 various ‘Malayalee’ communities are participating in this event.

The highlight of the program will be on the 24th August as it has been planned to felicitate a handful of socially reputed ‘Malayalee’ persons and organisations who promote, cultivate Malayalam language and Kerala culture in Australia. Moreover, the third day will be conducted in such a manner that each one will get the impression that they belong and get appreciated. All the winners in Arts competition will be awarded on the same day.

Provision of traditional cuisines is always an attraction in any cultural event as the people are residing in a foreign country they may have been compromising with their plate. Hence, in parallel with this three days event there will be a cultural food stall providing low-praised and rare traditional Kerala cuisine.

We the members of Australian ‘Malayalee’ Migrants Association Inc., are looking forward to celebrate ‘Kalolsavam 2014’ enthusiastically, and working hard to make it a spectacular program of the season for everyone involved. [Read More]